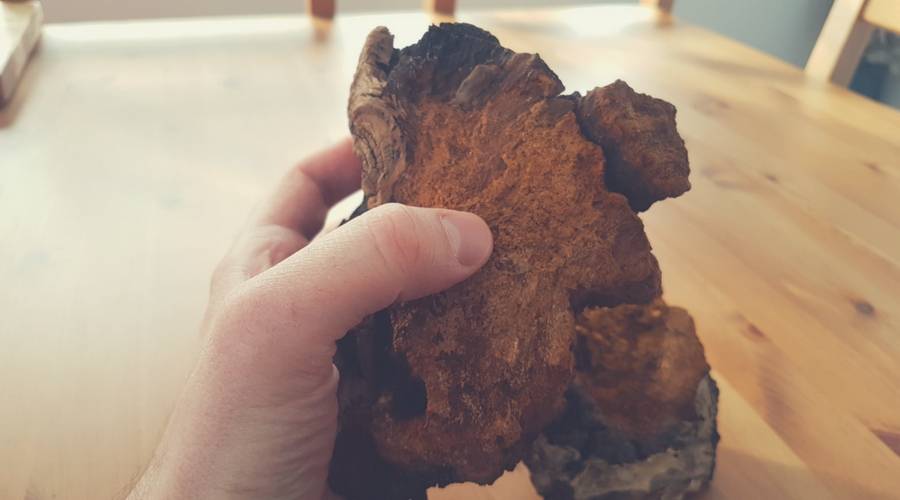 The King Of Medicinal Mushrooms

You might not think much of the Chaga Mushroom when you first see it in the forest. Unremarkable and a little unsightly, this mushroom oozes out of birch trees looking like charcoal, and is often disregarded as rot.

However, the Chaga Mushroom has such an incredible array of health benefits that it has been crowned as the “king of medicinal mushrooms.” Read on to learn about the ways Chaga can boost your immune system, protect your DNA, and much more.

What is Chaga Mushroom?

What is referred to when talking about Chaga – and the source of the powerful medicinal compounds- is not what you would typically think of as a mushroom.

Rather, it is a mass of mycelium, known as a sclerotia. This strange looking protrusion is rock hard and mostly black in color, which is due to an extremely high concentration of melanin.

The scientific name of the Chaga Mushroom is Inonotus obliquus. A parasitic fungus, Chaga infects birch trees in the hardwood forests of the Northern hemisphere, and thrives in colder climates. It is slow growing, taking 3-5 years to fully form.

Although it has been used for centuries as a folk remedy for a host of ailments, the use of Chaga mushroom extracts as a powerful health supplement is currently growing in popularity throughout North America, and catching the eye of the scientific community.

Properly prepared extracts of the Chaga Mushroom have been reported to provide a variety of acute health benefits, while supporting overall balance and wellness in the body. 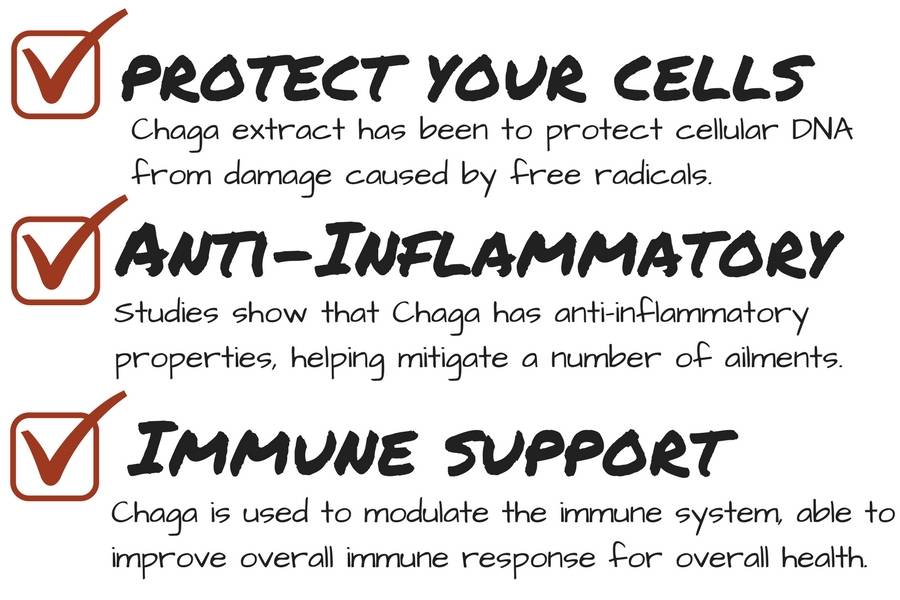 One of the most interesting benefits of Chaga mushrooms is its ability to modulate the immune system. This means that when the immune system is over-reacting, Chaga is able to calm it down and attenuate the response. In this way, the mushroom is able to help with reducing allergy symptoms, and is the reason why Chaga has been used to treat auto-immune disorders.

On the other hand, if the immune system is not performing to its full potential, Chaga is able to kick it into gear, helping stave off disease and infection. A well functioning immune system is a cornerstone of overall health, so it’s worthwhile to consider how Chaga might help.

The immune boosting effects of Chaga mushrooms are due to the presence of Beta-D-Glucans, a water soluble compound found within the cell walls of the mushroom. The mechanism by which this works has to do with the way the Beta-D-Glucans interact with the receptors in our immune system- although the exact reason for why this works so well is still unclear.

These Beta-D-Glucans are also what’s responsible for the reported modulating effect on blood pressure and blood sugar level, helping to keep the body in a state of balance.

Chaga as an Antioxidant

The black outer layer of the Chaga “sclerotium” contains a massively high concentration of melanin. Because of this, extracts which include this part of the mushroom are powerful antioxidants, helping to protect the cells of the body from harmful free-radicals.

These extracts can also help protect the body from other “oxidative” processes, such as cancer, arthritis and aging in general.

Where and how Chaga grows has a significant impact on the medicinal value of the mushroom. Efforts to cultivate the mushroom have mostly fallen short in an attempt to replicate the benefits of wild harvested Chaga.

“Cultivated” Chaga is typically just a culture of the mycelium grown out on grain or on some other nutrified media. This is largely ineffective for producing a quality supplement.

The reason for this is that many of the beneficial compounds within the mushroom only form because of the parasitic relationship between the Chaga and the host tree, most commonly birch.

For example, betulinic acid is a medicinal compound found in wild harvested Chaga that has anti-viral and anti-inflammatory properties. It also is showing promise as a powerful anti-cancer agent, able to inhibit the growth of cancer cells. The betulinic acid found in Chaga is actually a derivative of betulin, a compound found in birch trees, and is completely absent in cultivated Chaga which is not growing on birch.

Another important group of compounds found in Chaga is the phytosterols, thought to be responsible for improving cholesterol and having an anti-viral effect. These compounds are found in much lower concentrations and less variety in cultivated Chaga when compared to wild harvested.

Again, this is likely due to the parasitic nature of the fungus, and the length of time it takes for the sclerotium to properly develop in the wild. It is difficult to replicate these conditions artificially.

Simply consuming ground-up chunks of wild harvested Chaga mushroom is not going to be all that beneficial for you. This is because the active compounds in Chaga are locked up within the cell walls of the mushroom, and need to be properly extracted from the fungus in order to become bio-available.

Cooking the mushroom, or heating it will break down the cell walls and allow us to pull out the compounds. This is most commonly done with a hot water extract.

A hot water extract is the easiest and most common way to pull the beneficial compounds out of the Chaga mushroom. This method will only extract the water soluble compounds, which includes Beta-D-Glucans, the compound responsible for the immune boosting effects of Chaga.

This is usually done by cooking the mushrooms in hot water at sub boiling temperatures (~80 degC) for 3-4 hours. The mushroom fiber is then pulled out and the resulting liquid is concentrated and spray dried to be turned into a mushroom extract powder. 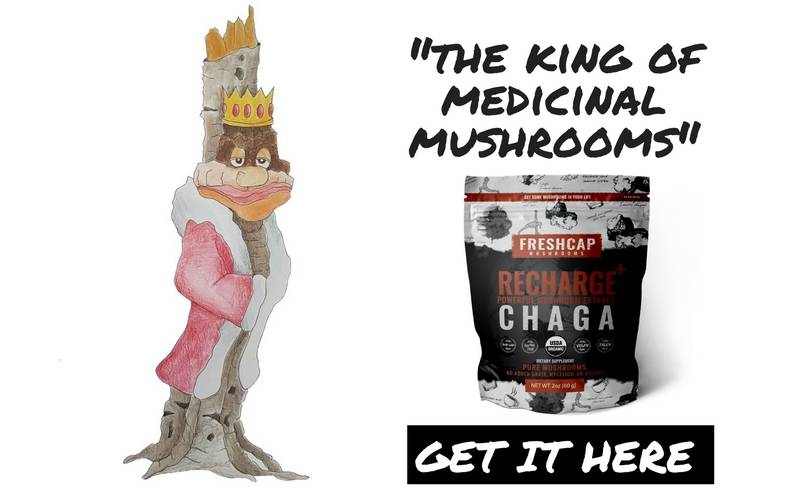 Getting some Chaga into your life can seem like a lot of work. You need to find wild growing Chaga, harvest it, pulverize it, and then perform a hot water extraction to finally be able to get the benefits of this amazing mushroom.

Luckily there is a much easier way to get your daily dose of Chaga - by using a properly prepared Chaga Mushroom Extract.

A properly prepared chaga extract should not require any additional processing. In other words, the beneficial compounds of a Chaga extract should already be bio-available, and can be consumed by simply adding the powder to a smoothie, or a cup of coffee.

First of all, not all Chaga mushroom supplements are created equal. Some supplement companies will only bother to grow the mycelium of the Chaga on grain. These “mycelium on grain” products don’t have nearly the same amount of beneficial compounds as wild crafted Chaga which has gone through an extraction process. In fact, some of these “Chaga supplements” are mostly grain starch.

A "mycelium on grain" product will usually list "myceliated brown rice" under "other ingredients". This makes it tough to know how much of the supplement is valuable Chaga, and how much of it is just starch from rice. Usually this means that the chaga was not wildcrafeted or harvessted from the forest, which also means it doesn't have the same medicinal profile as true Chaga.

What to Look For

You’ll want to check to make sure that your Chaga supplement lists some analytically verified levels of Beta-D-Glucans and a low percentage of starch.

There will always be some starch in even the best supplements (alpha glucans), but as long as the beneficial compounds are present, the starch is totally acceptable.

Also, the method of extraction should be well noted.

Chaga For Your Health

Chaga can be used to fend off allergies, to protect your cells from damage, to supercharge your immune system, or just help maintain a better balance of health in the body.

Whether or not it’s harvesting it from the wild and brewing a tea, or taking the easier route and just buying a supplement- we could all benefit from adding a little Chaga to our lives.

It could just be worth a try. 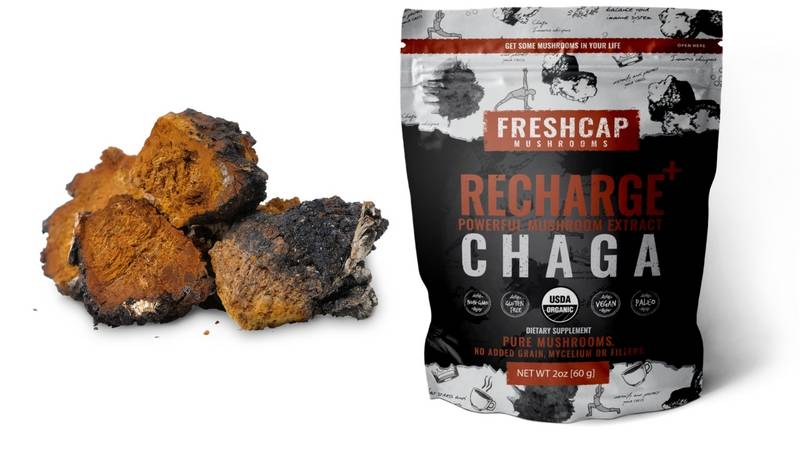 Get Some Chaga In Your Life!