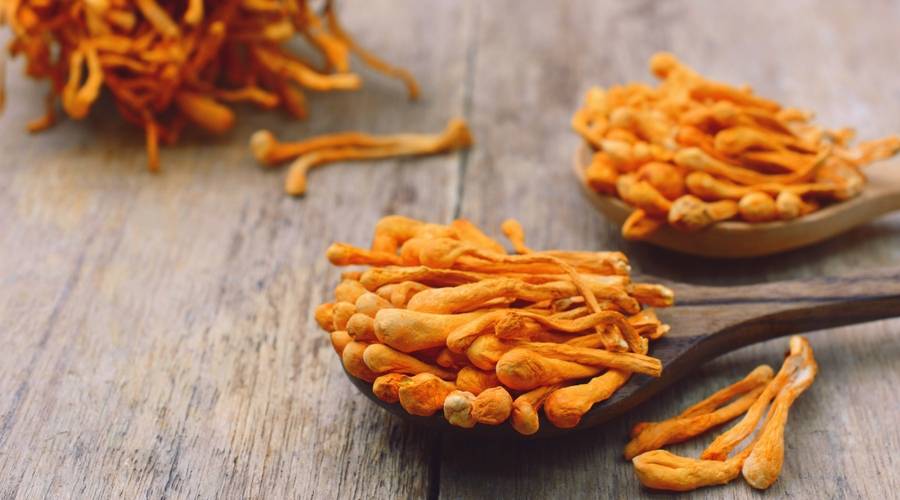 If you were an insect, Cordyceps Mushrooms would be the stuff of nightmares.

That’s because the spores of this parasitic fungus would have the potential to infect your brain- causing a kind of madness. As if possessed, you would climb up to a high perch, hold on tight, and die- giving the fungus an opportunity to fruit through your brain and spread its spores once again.

Luckily we don’t ever have to worry about this- because for you and I, Cordyceps is a superbly powerful medicinal mushroom which boasts incredible health benefits, including boosting your energy, increasing your endurance and improving overall health.

What is a Cordyceps Mushroom?

Cordyceps is actually a genus of mushrooms, and the term has been used to refer to a number of different species- most commonly Codyceps sinensis and Cordyceps militaris.

These not your traditional cap and stem mushrooms – and have many unique characteristics. Known as a “sac fungi”, or “ascomycete”, they are related to other famous fungi such as the morel and the truffle.

The Cordyceps fruiting body is actually a known as an “ascocarp”- but for out purposes, we can just refer to it as a mushroom! It is usually a long skinny fruiting body extending from the host, but can also be club shaped.

Cordyceps are found all over the world, but are most commonly found in Asia, with the highest density of species found in tropical rain forests.

Cordyceps mushrooms are highly sought after by practitioners of Traditional Chinese Medicine, with recorded use of the fungus going back over 500 years!

It has been used as a treatment or aid for an incredible variety of ailments; from kidney and lung problems to cancer and heart disease. Often, it is used as a way to stimulate the immune system, allowing the body to heal itself.

Cordyceps sinensis is thought of as having a good balance of yin and yang, due to the fact that it is half caterpillar and half fungus.

Like many other medicinal mushrooms, Cordyceps contain high levels of Beta-D-Glucans, a compound shown to act as a “biological response modifier”.

When the immune system is overreacting, as is the case with allergies and other auto-immune diseases, Cordyceps can help calm it down. On the other hand, if the immune system is weak, the mushroom can have the opposite effect, kicking the immune system into gear to help fend off disease. Several studies have been done which shows this to be true for Beta-D-Glucan containing mushrooms in general and Cordyceps in particular.

This ability to “modulate” the immune system can also have other effects, such as reducing tumor growth. Studies have shown that Cordyceps extracts have a toxic effect on tumor cells, while at the same time, not damaging healthy cells.

Cordyceps mushroom supplements are commonly taken by athletes looking to get an edge, and are said to help by increasing endurance, energy and overall stamina.

This first came into the public eye in the late 1993, when the Chinese women’s Olympic track team managed to break 3 world records at a single event. Rumors of drug use were rampant, until finally, the teams coach pointed to their secret weapon- Cordyceps mushrooms.

According to the coach, regularly ingesting the mushrooms boosted the runners energy, and relaxed the respitory tract, allowing the runners to use oxygen more efficiently and gain a competitive edge.

Scientific studies have been done more recently which show that Cordyceps can actually increase “vasodilation” helping to deliver much needed oxygen to the cells of the body during exercise, increasing stamina. This study, example, showed that athletic performance was increased for older healthy adults by taking Cordyceps over a 12 week period.

Another study set out to show the effect of Cordyceps on physical endurance by giving supplemental dose to rats over a period of 15 days and monitoring their ability to swim. The study showed that the group using cordyceps was able to increase their swim times by upwards of 20 minutes- a substantial improvement.

Cordyceps has also shown to help people with chronic fatigue syndrome and depression. This could very well be linked to increased delivery of oxygen, the same reason why cordyceps helps increase stamina and endurance. 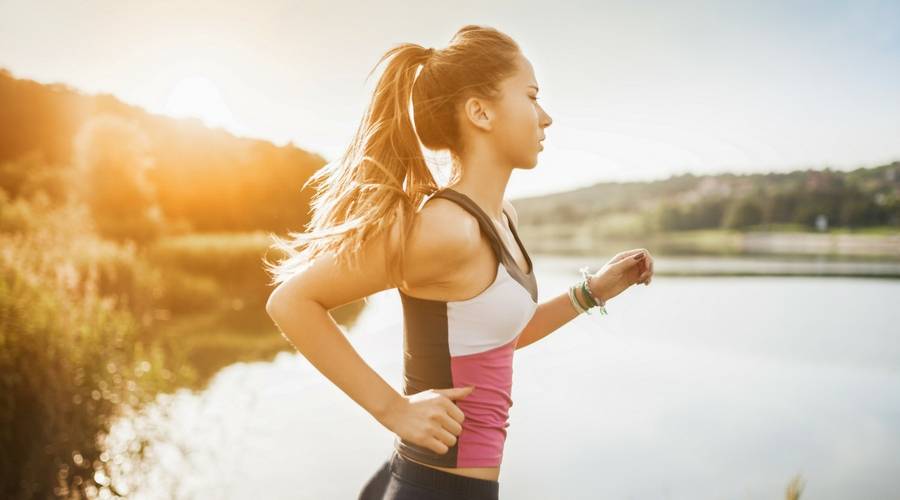 ATP is the base unit of energy in the body. It is the currency which your body uses to in order to carry out any function at the cellular level. Without ATP, you wouldn’t move.

Adenosine, a precursor to ATP is found in high levels in Cordyceps militaris. By increasing the availability of adenosine, Cordyceps can helps overall ATP production, allowing for increased energy production.

This has the potential to give athletes and weightlifters that extra boost of energy during exercise.

Cordycepin is a derivative of adenosine, known to be toxic to some cancer cells while also showing antidepressant effects. Although it is now produced synthetically, it was initially extracted from Cordyceps militaris.

There are hundreds of different species of Cordyceps found all over the world. There are two main species, however, that are of interest for human consumption.

Cordyceps sinensis is the most well known species, famous for its powerful medicinal properties. When people use the term “Cordyceps” they are often referring to sinensis.

It is commonly called the caterpillar fungus, due to the fact that is uses the insect as a host before eventually fruiting from its head. You can clearly see the caterpillar in images of harvested sinesis.

Codyceps sinesis is found in Asia, tucked in between the Himalayas on the Tibetan plateau. The fruiting body of the fungus has evaded attempts at successful commercial cultivation, and is therefore highly prized.

It is getting harder and harder to find, causing conflicts in the areas where it is harvested and bringing the price up to insane valuations. For example, the price has risen from about $5 per gram in the late ‘90s to upwards of $72 per gram today!

If you find a supplement that claims to include C. sinensis, it is most likely just not true.

The demands for supplemental Cordyceps today are just too high to rely on wild harvested Cordyceps sinensis- and using the fungus in this way is unsustainable both ecologically and economically.

Codyceps sinensis mycelium can infact be cultivated as a way to get the benefits of the mushroom without the astronomical cost and high ecological impact of wild harvesting the fruiting bodies.

There is a lot of research to show that this mycelium, known as Cs-4, does indeed contain the same active compounds as the wild Cordyceps fruiting body- if grown properly.

There are a couple different ways you can produce cordyceps mycelium- with the two methods yielding massively different results.

The best way to produce Cs-4 (really the only way to do it right) is to grow the mycelium in a nutrient rich liquid culture. Picture large fermentation tanks, with the strands of mycelium suspended in a liquid, rapidly growing and expanding. Once the mycelium has expanded as much as it can, it is pulled out of the liquid, dried, and pulverized into a powder that is 100% pure mycelium.

Producing Cs-4 in this manner will ensure that the end product has a compound profile that is similar to that of wild harvested fruiting bodies.

Cs-4 Grown as Mycelium on Grain

A cheaper, but way less effective way to produce Cs-4 is to grow the mycelium out on grain, similar to the production of grain spawn as done in commercial mushroom farming operations. Once the mycelium has colonized the grain, the grain is pulverized and dried- without first separating the mycelium from the grain!

This results in an end product that is mostly starch, not anything closely resembling pure mycelium. Of course, there will still be most of the same beneficial compounds as in the pure mycelium, but in significantly lower concentrations.

Supplement producers that use this method of cultivation usually don’t list the actual amount of beneficial compounds on the product. You can spot this by watching out for “myceliated brown rice” or something similar in the supplement facts.

Luckily, there is a species of Cordyceps that has a compound profile extremely similar to C. sinesis, known as Cordyceps militaris. In fact, these two mushrooms have historically been used interchangeably in traditional Chinese medicine.

Thanks to recent breakthroughs, the actual fruiting body of C. militaris can be cultivated reliably and affordably.

The method of cultivation doesn’t even require the use of insects. This means that cultivated C. militaris can be considered vegan, and can deliver all the same benefits as C. sinesis without the high price or the ecological impact of harvesting a diminishing resource.

Producing the actual fruiting body also helps to make certain the identity of the fungus, since Cordyceps militaris is easily recognizable.

Commercial cultivation of militaris makes supplementation with Cordyceps possible on a large scale.

Of course, with all the incredible reported and well researched benefits of Cordyceps, many forms of a Cordyceps supplementation are available.

There can be a lot of misleading information in this regard, so be sure to carefully read what you are actually getting when looking at supplements, and do your best to find a reputable supplier.

How Supplements Are Made

Generally, Cordyceps supplements will either be made from Cordyceps sinensis mycelium, known as Cs-4, or commercially cultivated Cordyceps militaris.

If it’s Cs-4, the mycelium is grown in large fermentation tanks before being dried and pulverized. The end result is a 100% pure mycelium product that is very similar to actual C. sinesis in terms of chemical make-up and quantity of beneficial compounds.

The only problem with Cs-4 is that it can be hard to be sure that you are getting what you think you are getting, as identification without actually fruiting the mushroom can be difficult. Ensure your source of Cs-4 is from a reputable supplier.

If the supplement is Cordyceps militaris, this likely means that the actual fruiting body was grown and harvested. Often, the fruiting body will then go through a hot water extraction drawing out the beneficial compounds, before finally being spray dried to produce a fine mushroom extract powder.

Things to Look Out For

Often, when cordyceps supplements are produced in the USA, the mycelium is grown out on grain such as brown rice or rye. This grain is then pulverized and turned into a dry powder, and the mushroom is never fruited.

Unfortunately, unlike C. militaris fruiting body or 100% pure Cs-4 mycelium, the end result of mycelium on grain is a product that can be as high as 65% starch.

This is because the Cordyceps mycelium fails to fully break down the grain, resulting in a large percentage of grain in the final product. It is usually obvious if this technique is used, as the ingredients list will show the presence of “myceliated brown rice” or similar.

For the most part, if your supplement claims to use C. sinensis, you are likely getting a mycelium on grain product. Even C. militaris supplements can be misleading.

Be sure to check your package or even follow up with the supplier to ensure that you are not getting a high starch product.

Cordyceps supplements will come in either a powder form or a pill form. The powders can easily be added to smoothies, protein shakes, or even coffee or tea.

The taste is pretty mild, and won’t have a huge impact on the enjoyment of your beverages either way. A serving of 1 gram of Cordyceps powder is typical, but check the package to see what if recommended for your particular supplement.

Cordyceps for the Win!

With the ability to boost your immune system, increase your energy and stamina and a host of other benefits, it’s no wonder why cordyceps mushroom supplementation has exploded in popularity in recent years.

Getting the right supplement from a reputable supplier could potentially yield incredible positive effects on your overall vitality. It just might be right for you.

Get Some Cordyceps in Your Life!