GET SOME MUSHROOMS IN YOUR LIFE. 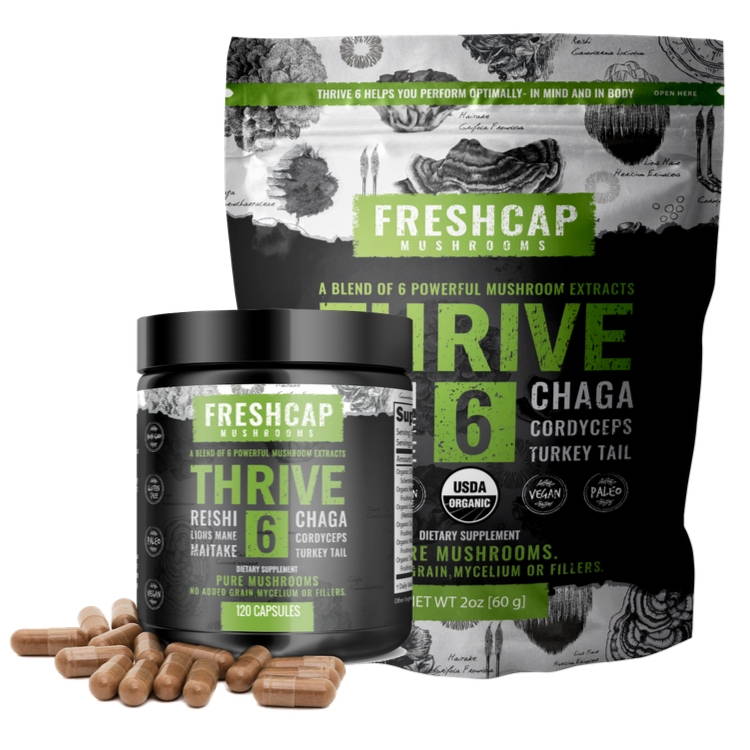 - EXPERIENCE THE REAL MAGIC OF MUSHROOMS-

Introducing THRIVE 6, a powerful and effective, all natural mushroom extract blend from FreshCap Mushrooms. This blend delivers the goods, using nothing but WHOLE MUSHROOM FRUITING BODIES so you can experience the real magic of mushrooms.

THRIVE 6 can help to:

-Strengthen your immune system.
-Clear the fog, supercharge your focus and mental capacity.
-Finally get your body back in balance

So what’s actually in the bag?

Each package contains 60 servings (about 2 months worth) of PURE MUSHROOM POWDERED EXTRACTS... a potent blend of 6 incredible species. Also available as 120 capsules. 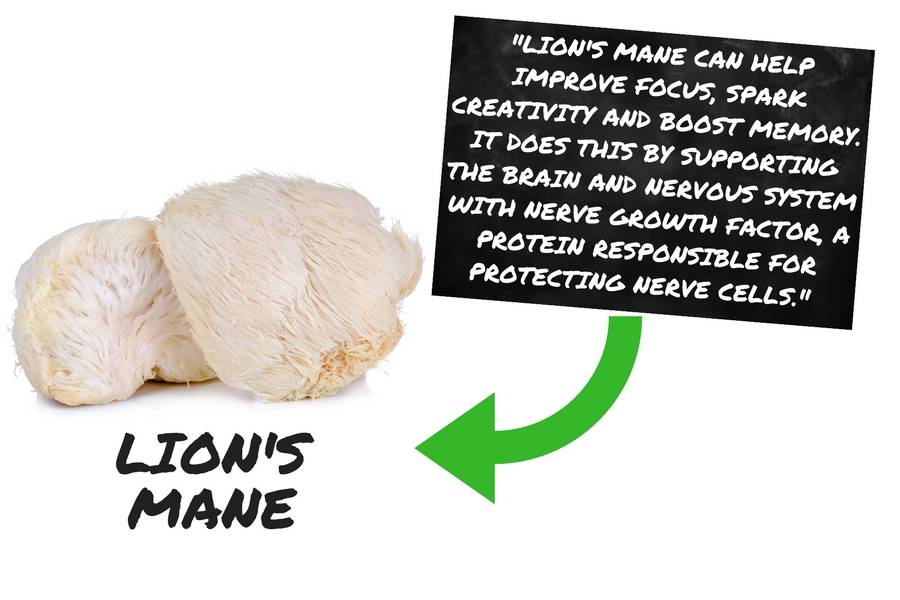 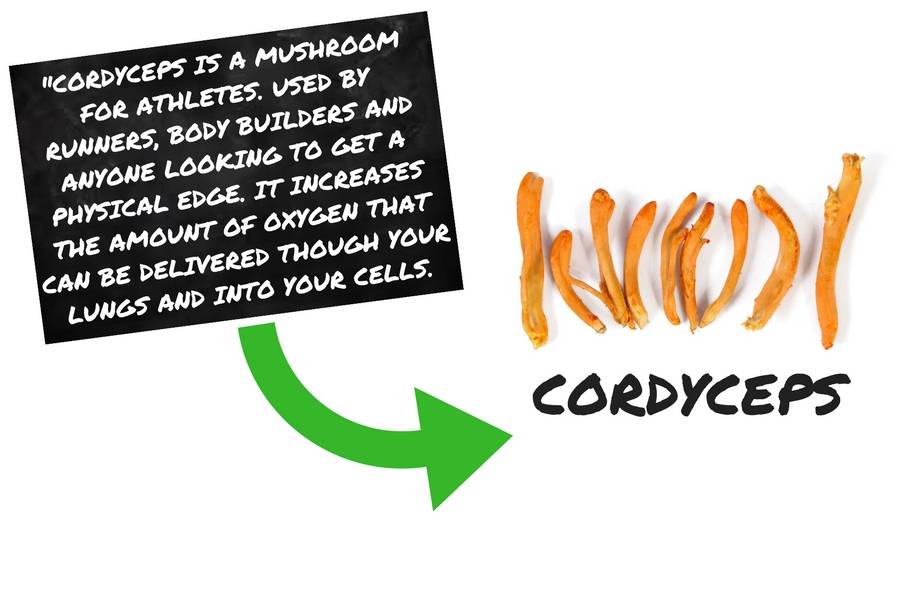 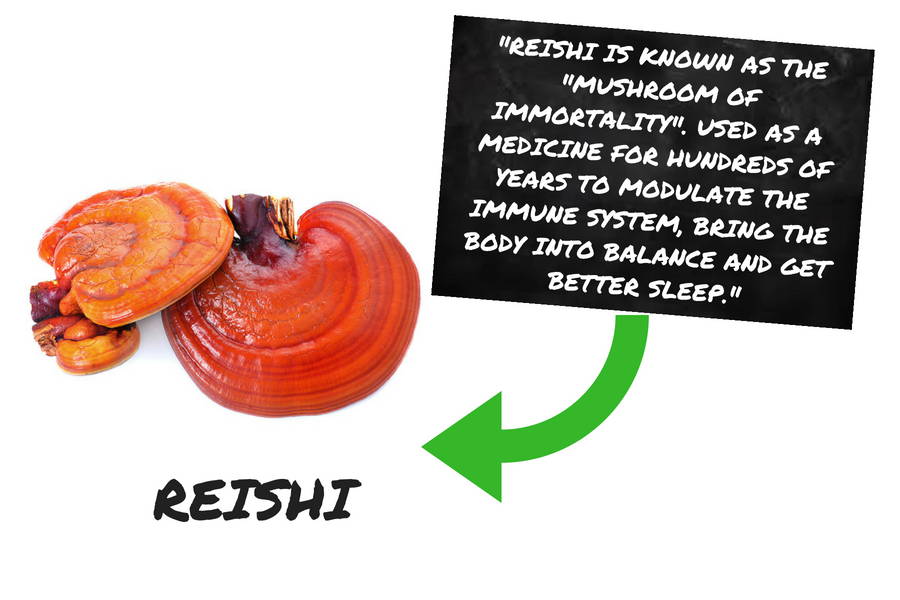 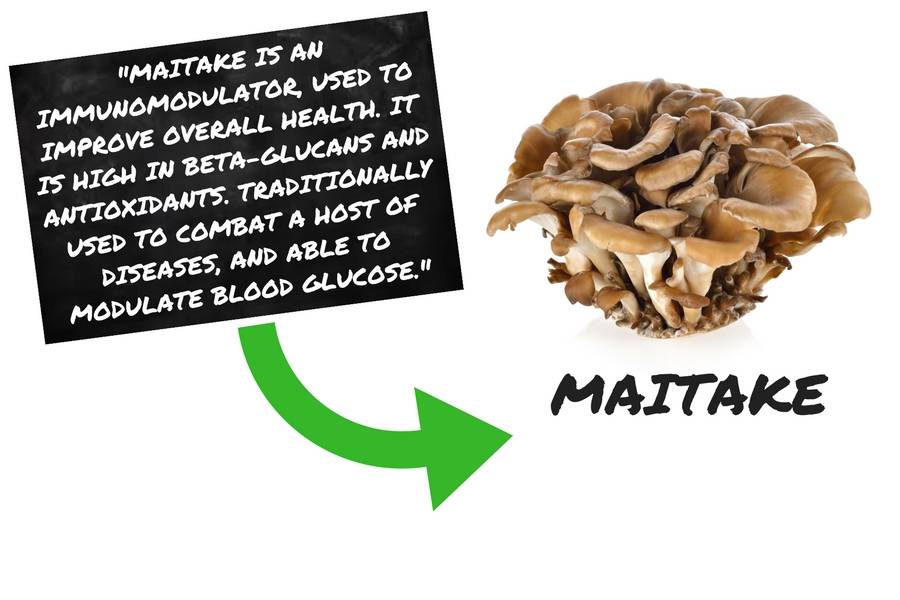 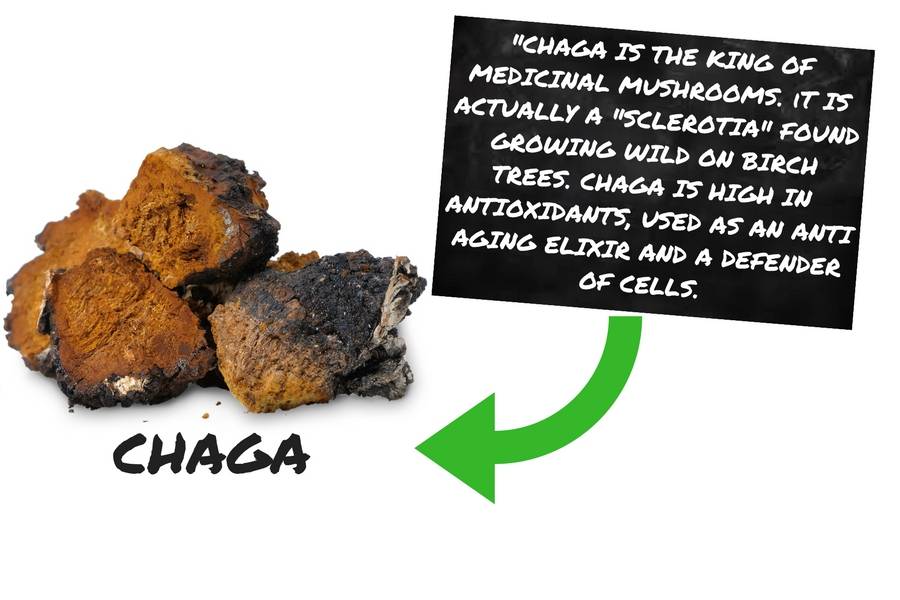 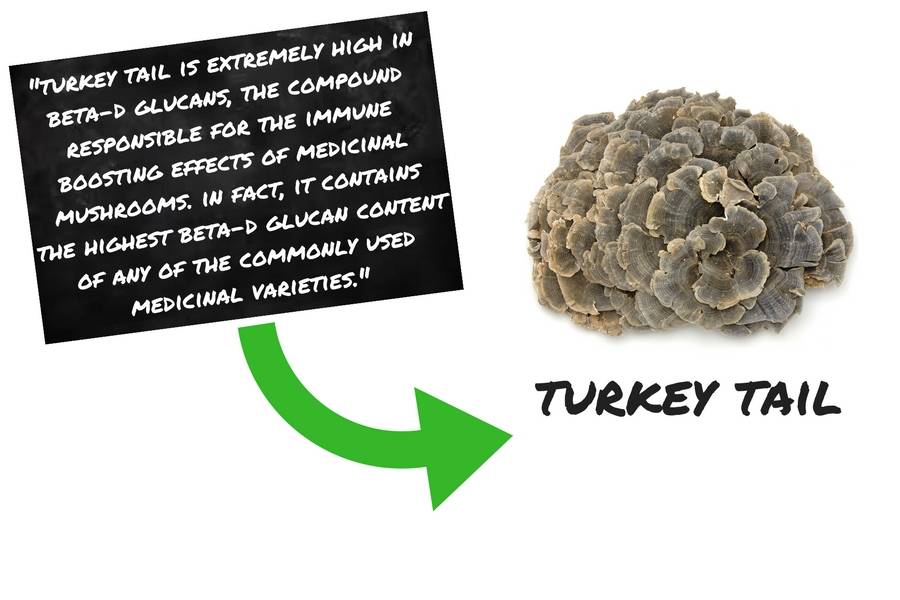 Alone, each of these mushrooms can be a medicinal powerhouse… but when taken together and used daily… it’s like having your own personal team of superheros, ready to knock down anything that gets in your way. That’s the power (the magic) of mushrooms. 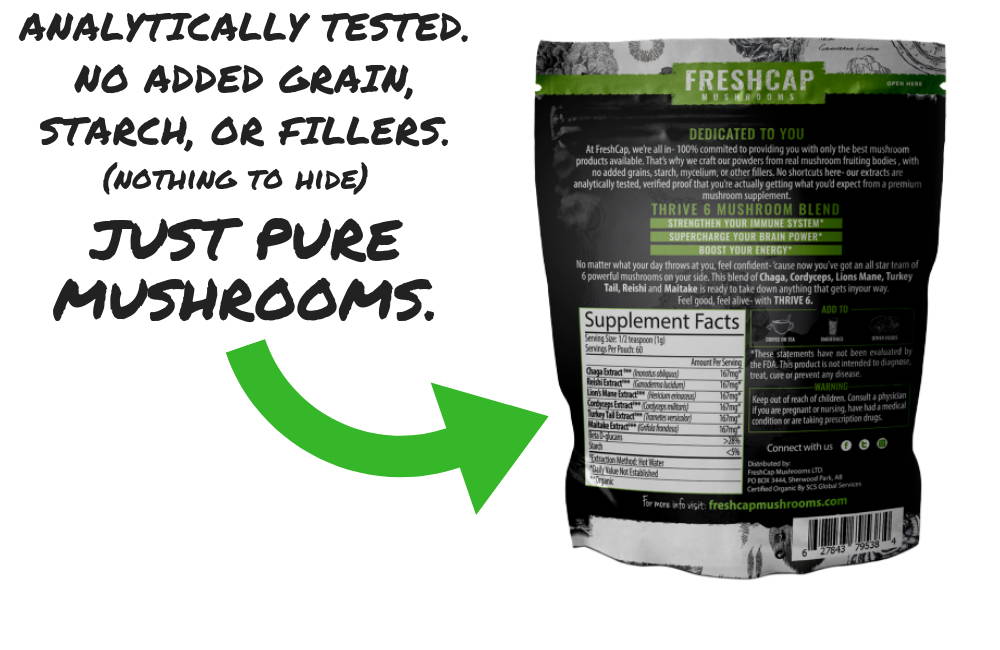 Want to try mushrooms today? Sign up below, I'll send you a 15% off code for THRIVE 6 and an instant download for our awesome new recipe book full of Mushroom Powered recipes!

THE MAGIC OF MUSHROOMS

Mushrooms have been used for thousands of years in eastern cultures for their incredible health benefits. In fact, these mushrooms were thought to be so powerful, they were even given marked names such as the Reishi’s “mushroom of immortality” and the Chaga’s “king of herbal medicine“.

The use of mushrooms as medicine is still hugely popular today, with more and more people in western cultures becoming aware of the life changing benefits everyday. Many people are now starting to supplement their diet with medicinal mushroom extracts as a way to bring the body into balance (also known as homeostasis), and giving the body and mind the foundation upon which to build lasting health.

Although there is a million things that make these mushrooms special, the real secret weapon – the beneficial compound that makes them truly “magical” – is the beta glucans.

NEED TO KNOW:
“Beta-glucans are normally “locked up” in the cell wall of the mushroom fruiting body, and aren’t all that easy to get out.”

There are a couple important points to note from that statement. First of all, the beta glucans are found in the mushroom fruiting body, ie. the part of the organism that actually looks like a mushroom.

You see, mushrooms can be thought of as two separate parts. First there is the “mycelium”, which is kinda like the “roots” of the mushroom. The mycelium is a fibrous tissue that grows either underground in the soil, or behind the bark through the trunk of a tree. This is actually the living organism. When it wants to reproduce (by dropping spores), it will produce what is known as a “fruiting body” – the part that most people refer to as the mushroom.

For a good analogy, imagine an apple tree. You can think of the mycelium as the tree itself and the fruiting body as the apples it produces.

The fruiting body contains the vast majority of the beneficial compounds (beta glucans), while the mycelium contains a non-significant quantity.

NEED TO KNOW:
“When buying mushroom supplements, you want to make sure it is a product of the actual mushroom “fruiting body”, not mycelium.” 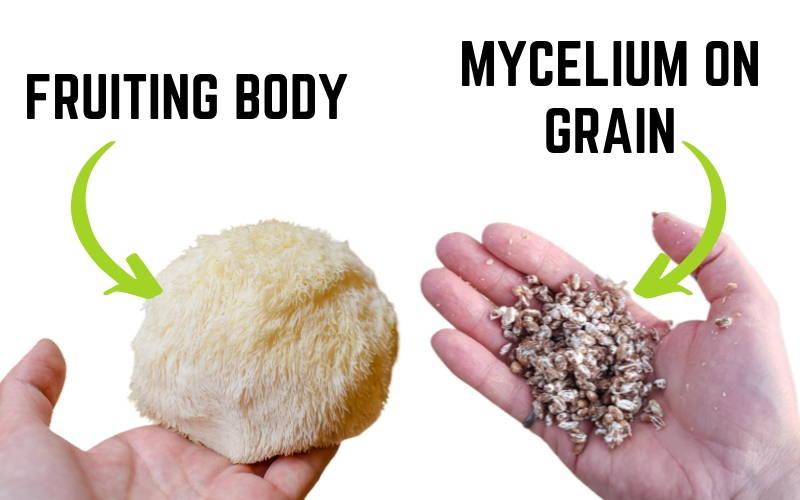 Believe it or not, some mushroom supplements are made by simply grinding up mushroom mycelium that has been grown on grain – typically rye, sorghum, millet, or wheat berries – without actually “fruiting” the mushroom. You can sniff this out by looking for “myceliated grain” in the ingredients. The result is a product that is mostly just grain- aka a giant waste of money.

Our Promise:
“THRIVE 6 USES NOTHING BUT PURE MUSHROOM FRUITING BODIES. NO ADDED GRAIN, STARCH OR OTHER FILLERS.”

All that being said, if you just ate some of these mushrooms, you likely wouldn’t receive all that many benefits either. Thats because the beta-glucans are locked up inside the cell walls of the mushroom fruiting body, and aren’t typically removed from digestion.

They need to be removed using an extraction process- typically a hot water extraction. This is done by heating the mushrooms in large vats of hot water and simmering for long periods of time. After the extraction, the resulting substance is spray dried, making a powder rich in beneficial compounds that can be much more easily absorbed and used by your body.

Our Promise:
“THRIVE 6 GOES THROUGH AN EXTENSIVE HOT WATER EXTRACTION PROCESS TO PULL OUT THE BENEFICIAL COMPOUNDS YOU’RE LOOKING FOR” 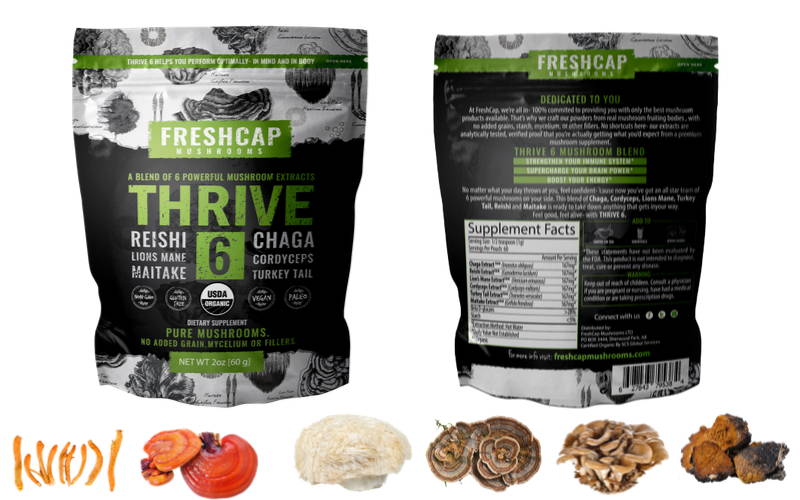 get some mushrooms in your life, and feel amazing.

THRIVE 6 is easy to use. Just add one scoop to smoothies, coffee or tea. You can also add it to food. The taste is described as “earthy” but not overpoweringly so.

Each 2 OZ bag contains 60 servings, or about 2 months of daily use.

It is also available in convenient capsules, with every bottle containing 120 capsules (60 grams of extract)

Get it here or on on Amazon, which is the fastest and most efficient way to get it to our customers. 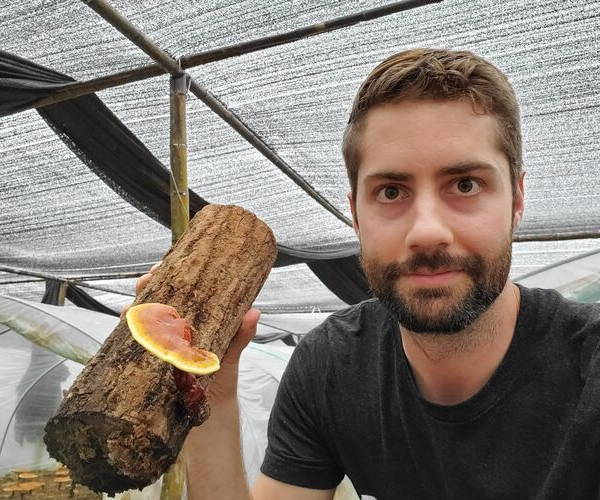 Where do we source our mushrooms?

At FreshCap we know how to grow mushrooms. In fact, we always have our own mushrooms growing at our home base- mainly for fun and to enjoy at the dinner table. But in order to truly offer a top notch powdered extract blend, we went straight to the place where you can find the best mushroom growers in the world – deep in the mountains of China.

Our Reishi, Lions Mane, Cordyceps, and Maitake mushrooms are grown in shadehouses and greenhouses, receiving tons of fresh air, natural light, and crystal clean water. Our Turkey Tail and Chaga mushrooms are wild-crafted from deep in the mountain forests.

Of course, we don’t use any agricultural chemicals to grow – everything is 100% natural and certified USDA organic.

Another measure we take to ensure the purity of our product it to test every single crop for unhealthy levels of heavy metals, or other contaminates.

Although we grow our mushrooms in China, the powders are blended and packed in the United States, at our GMP certified manufacturing facility. Before they are packed, they are tested again to ensure purity.

Our Promise:
“OUR MUSHROOMS ARE GROWN WITHOUT THE USE OF AGRICULTURAL CHEMICALS, WITH EVERY BATCH ANALYTICALLY TESTED AND SCIENTIFICALLY VERIFIED TO ENSURE A SAFE, PURE, MUSHROOM PRODUCT.” 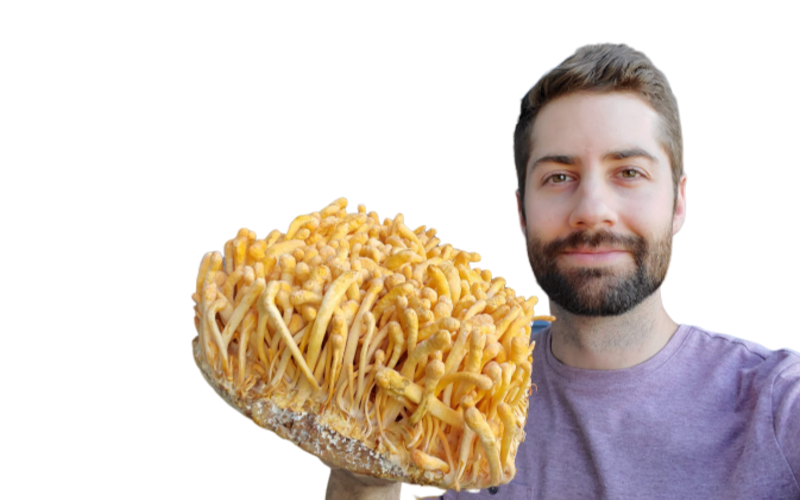 For as long as I can remember, I’ve had a profound interest in mushrooms.

I’m still not sure.

But what I do know is that the more I learn about mushrooms- the more intrigued I become.

That’s why, in 2015, I finally decided to do something with mushrooms…

You see, FreshCap originally started as a humble mushroom farm in central Alberta. We grew everything from Pink Oysters to Reishi. I built the farm myself from the ground up; including building an environmentally controlled grow room, a sterile laboratory, and everything in between. I spent about a year completely immersed in growing mushrooms- learning everything I could about the art mushroom cultivation. Man, did I learn a lot!

In no time, our little farm was firing on all cylinders… and we grew a ton of mushrooms! More than we even knew what to do with.

I quickly learned, however, that mushroom farming is…well… farming. It’s a ton of work.

Not only that, it’s a tough business.

The process of growing mushrooms at scale is labor intensive (even though I loved doing it), margins are thin, and trying to sell a quick-to-spoil fresh product is a challenge at the best of times.

That being said, I still think it’s definitely possible to succeed as a mushroom farming business – in fact, there are many fine folks doing it right now… but being a full time mushroom farmer… well, it wasn’t for me.

Back when I was building the farm, I also started freshcapmushrooms.com, as a way to have an online presence for the farm. I started writing an article here and there about mushroom cultivation, mushroom foraging, and just basically sharing everything that I have learned. I didn’t really expect anybody to find it. I was just having fun.

But over the next number of months, more and more people kept coming to the site… people interested in learning about how to grow mushrooms.

Before I knew it, I was sharing knowledge about mushroom cultivation with people from all over the world!

As I was teaching others, I continued to learn more and more about the amazing world of mushrooms myself.

This inspired a new vision… teaching the world how to grow mushrooms at home!

Why don’t more people grow mushrooms? I couldn’t quite figure it out… for some reason growing mushrooms is a mystery to most.

Sure it’s a little bit more complicated than having a vegetable garden… but why is that so? Does it need to be that way?

What if I could help make growing mushrooms at home more accessible?

What if I could demystify mushrooms?

Even though the farm wasn’t “in business”, I still grew lots of mushrooms. I still walked trails every day, with my head awkwardly scanning the ground and the trees looking for wild mushrooms. I still kept testing, exploring and playing with the art of cultivation.

In fact, you could say that I was a little bit obsessed. (…I still am)

But I couldn’t keep it all to myself.

So, I set out to write as many helpful articles as I could. I even started a YouTube channel, and eventually plan on making a completely free online course to teach people how to grow mushrooms from scratch.

But why stop there?

Like I said, the more I learn about the fungus among us, the more intrigued I become.

And more recently, I have started to learn about the amazing health benefits of medicinal mushrooms.

I learned that a huge percentage of the world’s top pharmaceuticals are derived from fungi. I learned that we share 50% of our DNA with mushrooms. I learned that mushrooms have been used for thousands of years by ancient cultures to heal, invigorate and revitalize.

I also learned that I also want to share that with the world.

What am I talking about? Here are some examples:

Reishi mushrooms have been dubbed the “mushroom of immortality”, known to modulate the immune system and promote longevity and vitality.

Lions Mane mushrooms are one of the only natural sources known to be able to regenerate nerve growth in the brain, enhancing cognitive ability, increasing mental clarity and reducing anxiety and stress.

Chaga Mushrooms are extremely high in antioxidants, helping to slow down the effects of aging and detoxify our livers.

Turkey Tail mushrooms have shown promise in reducing the side effects of cancer treatments and may even be able to stave off the common cold and flu.

Cordyceps mushrooms have been used by athletes to increase endurance and stamina by helping to increase the uptake of oxygen in our blood, while fighting respiratory infections.

Trust me… it doesn’t stop there.

In fact, more is being discovered all the time- and I really hope that the mushroom revolution is just getting underway.

We can live better and feel amazing with the help of mushrooms!

So there it is. That’s what FreshCap is all about.

If I had to sum it up, I would say that FreshCap wants to teach the world to grow mushrooms and to know mushrooms, because there might just be a lot more to the fungi under our feet… just waiting to be discovered.

Thanks for stopping by!