Free gift with purchase over !

Your cart is currently empty

Explore the power of mushrooms 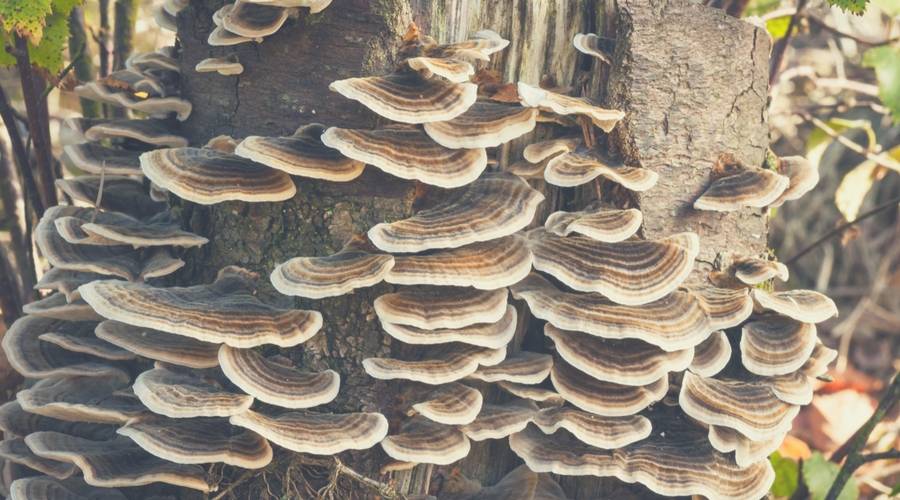 Turkey Tail, known scientifically as Trametes versicolor, is actually one of the most commonly found mushrooms in the world. Yet, it's incredible medicinal benefits put this amazing mushroom in a league of its own. Infact, Turkey Tail, rich in powerful Beta-D-glucans, has been taken for centuries to cure a host of ailments.

Today, derivitives of Turkey Tail are found in some of the world's top pharmaceuticals, and extracts of this mushroom are used by people all over the world to supercharge the immune system and build a strong foundation for overall health.

What is a Turkey Tail Mushroom

Turkey Tail is a polypore mushroom, which can be found growing naturally on decaying stumps, fallen logs and dying trees in temperate forests all over the world. The name comes from the resemblance of the fruiting body to a wild Turkey's Tail, with zones of varying colors- typically red, brown and blue/green. Once you're aware of this mushroom, you’ll start to see it everywhere!

It's a thin, but robust mushroom that often grows in clusters, with a single "fruiting” producing hundreds of individual mushrooms. The mushroom is relatively easy to cultivate, but since they grow in such abundance in the wild, the mushroom is often harvested directly from the forest for medicinal use.

Turkey Tail mushrooms have been revered for their health benefits for centuries.

The common health benefit for all medicinal mushrooms is that they are able to support the immune system.

When you think about it though, this is huge- since the vast majority of ailments and diseases can be linked to either a failure or an overreaction of the immune system.

In fact, the Turkey Tail extracts we use in our products contain no less than 45% Beta-D-Glucans. This is the highest percentage Beta-D-Glucans of all the medicinal mushrooms by a long shot.

How Do Beta Glucans Support the Immune System?

Without going to deep down the rabbit hole, we can explain how Beta-D-Glucans work by understanding the relationship between these compounds and our immune cells.

Beta Glucans themselves don’t fight disease. Instead, these compounds are able to stimulate or activate the other cells responsible for immunity, namely the “natural killer cells” (also known as NK cells). These extremely important defenders travel throughout the blood stream looking for foreign invaders and other damaged cells, destroying threats as the show up.

When Beta-Glucans enter the body, they mimic an invader, and are taken to task by “macrophages”, innate immune cells that engulf the Beta-Glucan and take them to the lymph nodes. There, they are broken down into smaller bits.

The fragments are then released and bind to these NK cells, and other immune cells, essentially “priming” them and allowing them to reach and react to pathogens much quicker.

PSK, also known as “Krestin”, is a special polysaccharide extract from the Turkey Tail mushroom, originally discovered and first used in Japan for its reported anti-cancer properties.

The extract is thought to be so beneficial as an adjunct therapy to traditional treatment that all health care plans in Japan cover its cost.

That is in sharp contrast to the United States, where PSK cannot be legally sold. However, the pure, wholly extracted version of Turkey Tail Mushroom is actually considered an FDA nutraceutical, and can be sold and marketed as a supplement.

Where Do the Mushrooms Come From?

Turkey Tail mushrooms grow on dead or dying hardwood stumps and logs, in large beautiful clusters. They are one of the most commonly found mushrooms in the world. Due to their natural abundance, they are often commercially harvested from the wild for the purposes of extraction and supplementation.

Turkey Tail is also easily cultivated in grow-houses and shade-houses, either on hardwood logs, or on a mix of sterilized hardwood sawdust. There are numerous different strains of Trametes versicolor available for commercial production, with the most prolific being chosen for commercial cultivation.

How To Get Some Turkey Tail In Your Life

So you might be wondering how you can get some Turkey Tail in your life?

Since Turkey Tail grows almost everywhere in the forest, you could always try hunting for this mushroom yourself! Although it is relatively easy to identify, you’ll want to make sure you know EXACTLY what you are getting. Some wild mushrooms can be harmful, and it is super important to have 100% when foraging in the wild. Having a good guide book is a must. It may even be worth it to seek out a local expert or experienced mushroom forager to join you on your mushroom hunts.

You could also try to grow it yourself! Although Turkey Tail is a relatively easy mushroom to grow, it does still require a pretty good investment in time, equipment and materials. If you are just looking to get the medicinal benefits of the mushroom, growing it yourself definitely isn’t the best option.

Just eating some Turkey Tail off of a log or stump will not be all that beneficial. In order to properly get the benefits from this amazing mushroom, we need to first perform an extraction.

The most straight forward way to do this is through the process of hot water extraction.

Hot water extraction is not all that different from making a tea. Whole fruit bodies of the mushroom are left to simmer in hot water, typically around 80-90 deg C, for a number of hours.

This allows for the polysaccharides (Beta-D-Glucans) and other beneficial compounds to be pulled out of the mushroom and become bio-available.

The resulting liquid is then spray dried, and mixed back in with the fiber to make a powdered mushroom extract high in beneficial Beta-D-Glucans. You can easily add this powdered extract to smoothies, coffee or tea to get your daily dose of turkey tail. You can also often find turkey tail extracts in easy to use capsules.

It is also possible to make a “turkey tail mushroom” supplement without using the actual fruit body of the mushroom at all. This is done by instead growing the mushroom “mycelium” in either a liquid culture, or on grain.

The problem is, that although much easier to produce, the mycelium alone does not contain the same level and concentration of benefits found in the actual fruit body of the mushroom. When the mycelium is grown on grain, much of the final product will actually be a cereal grain, a result of the mycelium not being able to fully breakdown the growing medium. You can tell if mushroom supplements are grown on grain if one of the ingredients is “myceliated brown rice” or something similar.

When considering any kind of mushroom supplement, you should look for products that use only the whole fruiting body of the mushroom.

GET SOME TURKEY TAIL IN YOUR LIFE!